Calling the Korean War the “Forgotten War” is not unfounded. Shamefully, only three out of ten 18-24 year-old Americans can find North Korea on the map according to a National Geographic-Roper Report. University of North Carolina professor Bruce VanSledright found that 88 percent of elementary school teachers considered teaching history a low priority because students aren’t tested on it at the state level. With teacher pay aligned with test performance, it’s seems that the Korean War is not only the Forgotten War, it was never taught in the first place!

This is where Tell America comes in

The objective of the Tell America program is to give high school students and the community a better understanding of the history of the Korean Peninsula, how and why Korea was divided after WWII and the effects of the Korean War and how it impacts global events to this day and into the future.

KWVA Chapter 169 in The Villages, FL, under the leadership of Major General John McWaters, has made presentations in 2019-2020 to six high schools in central Florida for a total of twenty-eight classes and 564 JROTC cadets and students. MG McWaters also made Tell America presentations to many other local organizations such as the Asian/America Club at their annual convention in December, The Band of Brothers, a large organization of over 620 local, Canadian, UK and FRG members and the Organization of Vietnam Veterans.

In front of rapt audiences, Major General McWaters and his staff weave a story about how the Korean government and society fell victim first to Japanese expansion and then Cold War interests as the US and the Soviet Union split the country at the 38th parallel. North Korea and South Korea.

The students were particularly interested in the Korean War section and General McWaters’ personal stories of the war as a Combat Engineer added to the experience.

LTC Charles M. Minyard (Ret) is the JROTC coordinator at Umatilla High School in FL. He shared, “The Umatilla High School Army JROTC program really appreciates MG McWaters and his staff taking the time to present an often forgotten part of American military history. The presentation was well received by both the cadets of our program and the students of many of our history classes on campus. What really impressed the students and cadets were the personal stories; it made this part of history a little more real. We look forward to scheduling next year’s presentation.”

The most interesting result of the Tell America presentations are the “aha” moments by the students:

Part of the success KWVA Chapter 169 has had with the Tell America program has been the establishment of a $500 annual scholarship award to one student at each of the six participating schools. The scholarship recognizes achievement in grade point average, dedication to military subjects and leadership. Three of the 2020 awards have been presented so far, recognizing Reese Climo (Mt Dora H.S.), Amber Shaw (Eustis H.S.) and Lindsay Sigler (Umatilla H.S.). Reese is attending Fire Academy in the fall. Amber is studying at Stetson University while applying to both the Naval and Air Force Academy and Lindsay plans on continuing her military studies at Santa Fe College in Gainesville, FL. 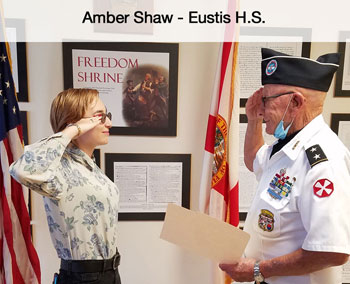 Tell America has an important story to share. As Korean Service Members pass, it’s up to Korean Defense Veterans to keep the legacy alive. It’s essential for future leaders to appreciate the complexity of geopolitical events. Let’s give students their “aha” moment with Tell America and make the Korean War the (Un)Forgotten War. Winston Churchill said, “The farther back you look, the farther forward you are likely to see.” If Churchill is right, learning about the Korean War just might prevent a future one.

About the Author
Mark D. Carey was commissioned as a Field Artillery Officer in June 1977 and served in Korea from 1977-1978 in the 1/15 Field Artillery, 2nd Inf Division. After attending flight school, CPT Carey flew in the 3/5 CAV and 214th Attack Helicopter BN in the 9th Inf Division at Ft Lewis, WA. He left military service in 1983. Mark is on the KWVA Chapter 169 Board as Director of Communications/Webmaster.